The world is a hard place and it’s only going to get harder unless we change course. Ask any working or middle class American. Ask any millennial, it’s harder for them than it was for their parents. It’s not just an abstract idea. It’s a fact.

I know firsthand. I was living and working in California. I made a respectable salary in my mid-twenties. I was grateful, but I always felt like I couldn’t get ahead. Rent was expensive. I paid $2k/month for a 2 bd/1 ba. And yes, that was a little on the high side of the spectrum, but I have a pit mix, so once you set the dogs okay filter (the breed is a separate social filter), then it greatly reduces your pool of options. You also end up paying a premium as any dog parent knows.

As I was working, I was saving, but I felt like I wasn’t saving as fast or as much as I should be. Why was this case I thought? Emergency expenses that came up like needing a new car or medical bills for a pet, sure, those hit my bank account hard. But another big thing was I ate (and drank) out a lot. I guess it was cathartic and easy. Eating and drinking my feelings. But what were those feelings?

Every day I felt exhausted. I felt unfulfilled. I was depressed. I felt like I was working and commuting all the time and by the time I got done, I was worn out. I was paying a lot of money renting a house I didn’t get to enjoy. The weekends were time to get caught up on cleaning and errands, then back to work on Monday.

I thought maybe if I had something to work toward, then it would give some more meaning to the grind. As a single person, I don’t have any children. I know that makes a huge difference for people who work. You’re working for your children and their future. But I didn’t have any kids.

I contemplated buying a house. Maybe that would give me some meaning to the grind so I felt like I wasn’t just working and throwing money away on rent for a place I barely saw. But a $400k twenty to thirty-year mortgage was a scary idea, especially as a single person with one income. What happened if I lost my job? How would I afford the $2000+ mortgage every month? I’d lose my house. It was anxiety-inducing even thinking about it.

My parents were able to buy their house with one, lower-middle-class income in a now expensive county in California. But wages have barely doubled since the 1980s while the price for houses has risen 5x or more in my hometown. Although my hometown is an extreme example, this is common in California and other areas of the country. The cost of living is rising quicker than our wages, and we’re feeling the pinch.

Many Americans are bridging the gap with debt. They are trying to maintain a similar quality of life to what their parents had without making more money. They are taking on larger mortgages, bigger student loans, car payments, and credit card debt.

We don’t make as much as our parents did 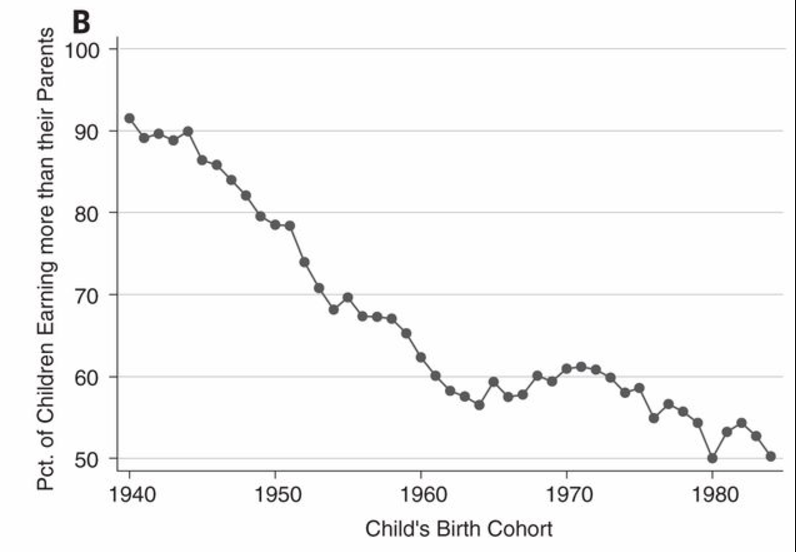 We’re trying to maintain a quality of life without the income to support it, so we’re buying stuff with money we don’t have. 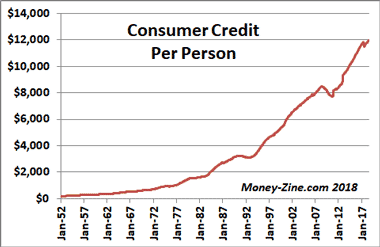 This graph highlights the fact that the amount of consumer credit or credit card debt that Americans have has been growing. 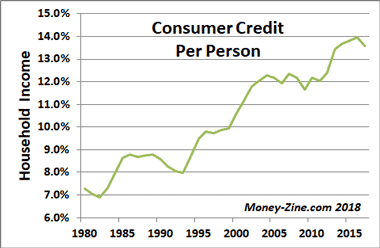 This graph shows that since the 1980s credit card debt as a percentage of household income has nearly doubled.

It’s no wonder more Americans are more depressed than ever. I was one of them. It’s depressing to spend most of our time working, but struggling to make ends meet. Many of us try to escape it. We binge watch tv shows, eat our feelings, buy stuff we don’t need, self medicate with pills and alcohol, and browse social media for hours.

I couldn’t help but question: What happened to the American Dream?

I looked around and I saw friends living with college degrees moving back in with their parents because they couldn’t find work or afford housing. All the while, I was grinding to keep my own head above water.

In May 2017, I moved to Flint, Michigan to embark on a research project and an investigation into the structures of American society. I wanted to understand not only how, but why they were failing us. It was quite the transition coming from one of the most affluent places in the country, Carmel-by-the-Sea to one of the most impoverished. Or at least that’s what the data tells you, but there is more to life than statistics.

Because I can tell you that Flint is full of rich people. People who are rich in character and in spirit. A type of wealth that you can’t buy.

When I came to Flint, I thought it was wealth inequality that killed the American dream. I was ready to bust out all the facts, figures, charts, and statistics to support my argument. But little did I know at the time, I was conformed to a pattern of thinking that was of this world. I needed to think bigger. Yes, the data is important, but it’s only a piece of the story.

I don’t know why I was compelled to move to Flint and to stay there for nearly three years, but it was a stronger calling. Now, a few years later with some hindsight, I can say that God brought me to Flint and he brought me back to him here. It’s been a spiritually transformative experience.

You can feel God moving in Flint. In the dark rooms of dilapidated houses, in the eyes of stray dogs, in the laughs of school children. He’s here. I don’t know why I couldn’t see Him in California. Maybe it was because I was so busy with work. It took slowing down to appreciate Him.

In Flint, it’s a city ordinance that you keep your lawn mowed, which lead me to get a lawn man like most people in my neighborhood. Little did I know that my lawn man was being used by God. Every week he invited me to church, sure as clockwork, but never pressured me. When I finally showed up to the church, guess who the pastor was? My lawn man. He failed to mention that when he invited me all those times. Talk about walking the walk. God works in mysterious ways.

Americans don’t go to church anymore. Although we can have a relationship with God outside of the church, each generation is less exposed to Him. Today, some children have never attended a church sermon.

I was lucky that my mom took me to church as a child and I found my way back. I lost touch with God from high school until my late twenties.

Start children off on the way they should go, and even when they are old they will not turn from it. 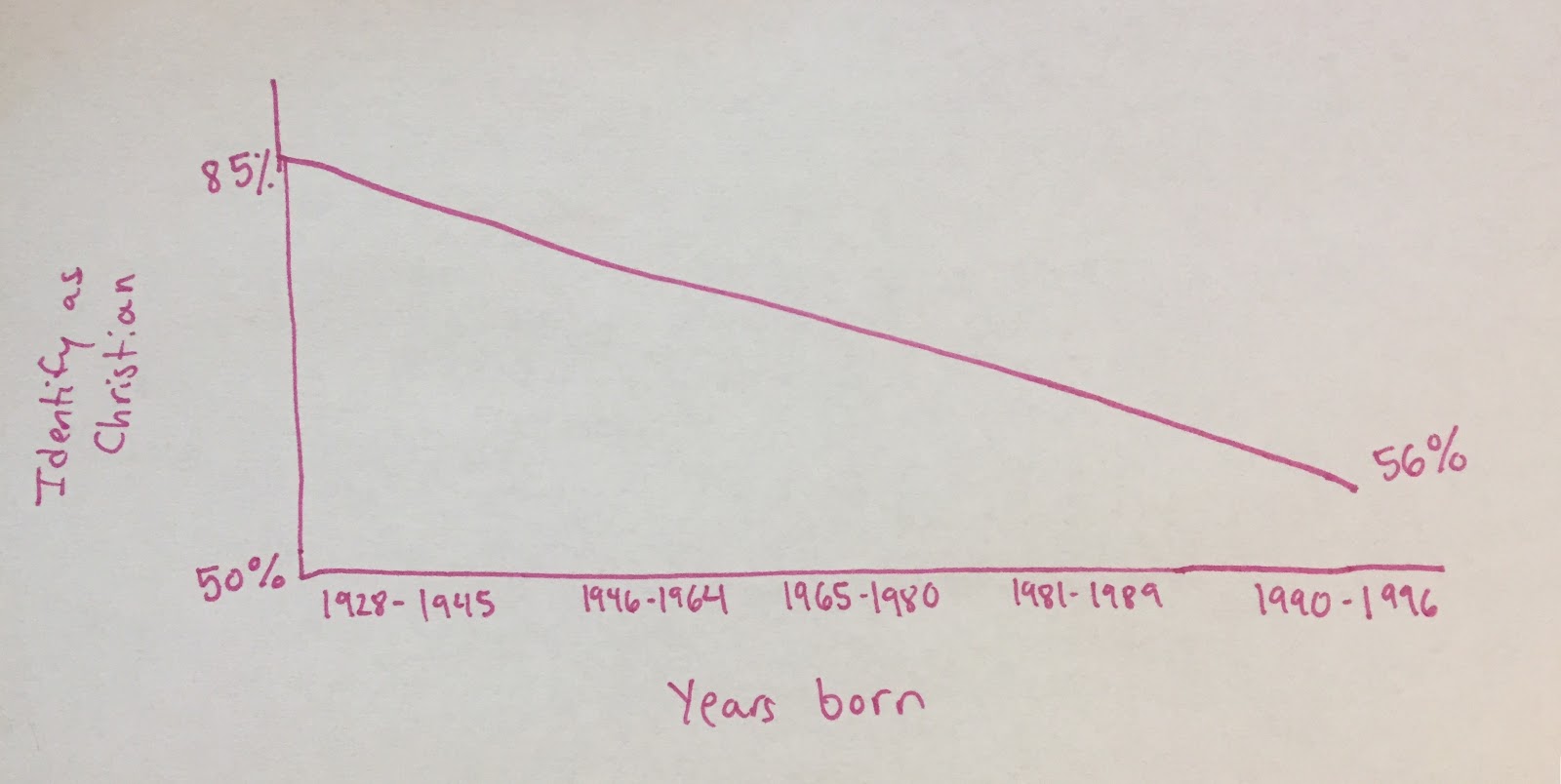 With so many people unfamiliar with God, the United States has grown more secular. Without a relationship with God or an understanding of the scripture, many people don’t have a foundation of strong, righteous values anymore. Although we will never be perfect, these Christian values provide a solid foundation for our personal lives and our society. Now, we don’t even like to talk about God. The trend is clear in our vernacular and our culture. The great scientists, political thinkers, philosophers, and writers used to talk about Him, but we don’t like to mention Him anymore.

In the absence of God, we’ve been filling the void with things of this world.

We’re all looking for something.

In search of worldly gratification, we abandon the real pursuit of happiness.

It’s the political or social movement of the time. It’s the likes on our social media posts. It’s the feeling of getting a new car and people going wow for a while. It’s the new gadget or gizmo we didn’t need that gets old all too quick. Many of us go to school, get good grades, get a college degree, get the career, get the spouse, buy the house, without ever thinking twice about why we do it. It’s a whirlwind of what the world tells us we should be doing.

“Anything that just costs money is cheap.” – John Steinbeck

It’s no surprise that as we seek gratification, we still feel empty and depressed. I know the feeling all too well.

Without a strong foundation in faith, we are susceptible to the corruption of the world. It seeps into our personal lives and into our societal structures.

The world touts vices over virtues. Greed over generosity. Gluttony over moderation. Pride over humility.  Envy over thankfulness. Sloth over diligence. Lust over love. Wrath over peace. Sometimes society shouts these vices at us and other times it whispers. But either way, it’s broadcasting a set of values that are not the right values. If people don’t learn the right values, then it’s easy to fill the void with the wrong ones.

Out of all the vices that have taken hold of American society, the worst of all is greed and the love of money. Some people who seek out money, play on our vices to make more money. They take advantage of our insecurities through anxiety marketing, they exploit our jealousy as we try to keep up with the Jones’s, they capitalize on our laziness and gluttony with one-day delivery and supersized meals making us sick, they exploit us in countless ways never truly finding happiness themselves either.

No one can serve two masters. Either you will hate the one and love the other, or you will be devoted to the one and despise the other. You cannot serve both God and money.