Gross Domestic Product (GDP): the total value of goods produced and services provided in a country during one year.

Per Capita: for each person

GDP per capita is misleading, however, because it doesn’t account for economic inequality.  In fact, many Americans have seen their wages remain stagnant since the 1970s with their purchasing power frozen or reduced. Many of our neighbors are struggling more than they have in a long time, but those who run the world will tell you that the standard of living is increasing and the economy is doing great.

The benefits of technological advances have largely gone to the top 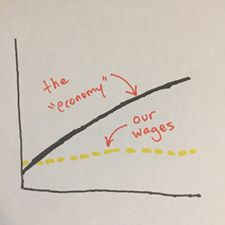 This graph (somewhat) clearly shows that the economic gains are not equally distributed among Americans. If they were equally distributed, then the lines for GDP and Median Household Income would lay on top of each other. Although an equal distribution isn’t realistic, it would be nice to see larger gains to our wages as our economy does better. Spread the wealth.

In fact, when people refer to the economy in America, they are largely referring to the stock market. The wealthiest 10% of American households own  84% of stocks.

So when people say the economy is doing well, they really mean the stock market is doing well, which really means that the wealthiest American families are doing well. These are the new nobles, the new factory owners and managers. They are the wealthy owners of corporate stock, financial investors, and CEOs. And it’s great for them that they are not only financially secure but flourishing. A win for our neighbors is a win for us.

But how are the majority of our neighbors doing today versus how they have done throughout time from an economic standpoint? The previous chart on GDP per capita was great at illustrating the dichotomy of the United States experiencing growth while American wages remained stagnant.

With the gains going to the top, what does economic inequality in America look like today? How does this compare to other societies throughout history?

Luckily, there is a measure that can help us better answer these questions.

What is the Gini coefficient?

The Gini coefficient is a statistical measure of economic inequality, and it got its fun little name from the Italian statistician who created it, Corrado Gini.

This Gini coefficient is a measure for economic inequality which is a symptom of a deeper issue in society:

It could be argued that throughout time extremely unequal distribution doesn’t just happen naturally, but rather small advantages are exploited and used to gather more wealth in very intentional ways.

Let’s take a closer look at some estimated Gini coefficients for a few societies throughout different points in history to see how the present-day United States stacks up.

Gini Coefficients of Societies Throughout History 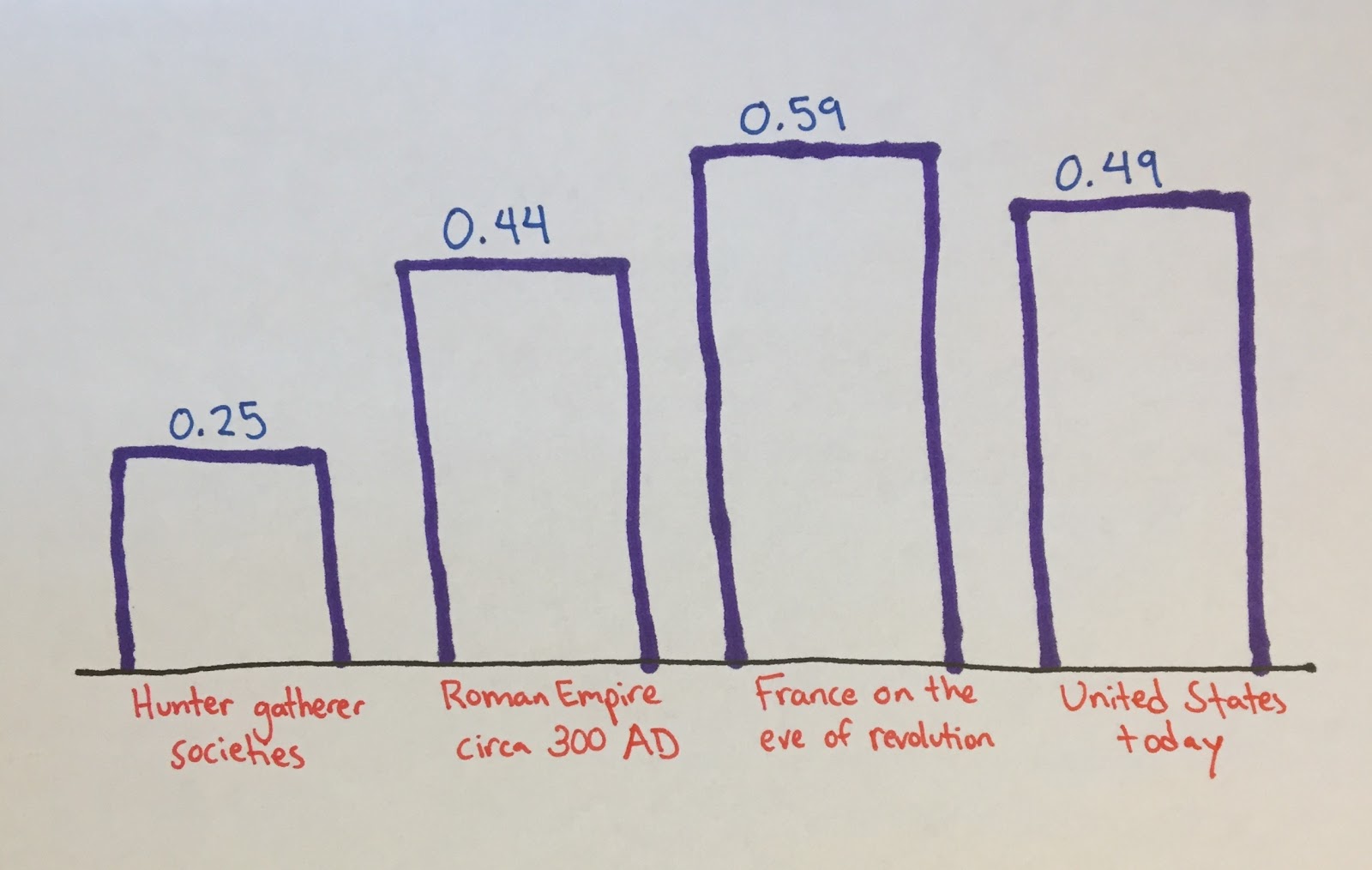 This chart highlights that economic inequality in the United States today is getting dangerously high.

Economic inequality in and of itself is not bad. If people want to work hard and earn more, then all the power to them. But the problem is when people start putting wealth on a pedestal. When this happens, we begin to see other issues in society. A high Gini coefficient is a canary in the coal mine, it’s a harbinger of bad news. If you dig deeper into the history of societies that had a high Gini coefficient, you will begin to notice a trend in that an unhealthy obsession with wealth had infected their people, systems, and structures.

Albeit there can still be good people in a society that has largely shifted its views to embrace the pursuit and worship of wealth versus the well being of its citizens, but structurally, the systems have been warped to support and cater to the greed that has taken root in the hearts of many people. Even those who have turned their backs on loving their neighbors in pursuit of material wealth aren’t necessarily bad people, they are just lost. It goes back to loving the sinner and hating the sin.

Love all your neighbors. Rich and poor. Greedy and giving.

But take a close, hard look at the systems, structures and institutions that have fallen victim to systemic greed. Are those systems promoting the welfare of your neighbors?

In the next blog post, we’re going to look at a couple of societies that had extremely high Gini coefficients and examine the structural greed that eventually uprooted them. Stay tuned.