“An imbalance between rich and poor is the oldest and most fatal ailment of all republics.” – Plutarch

Rome was a society built on slavery and conquest. One might argue that they were much more barbaric than our current American society, which might be true, but an analysis of historical data paints a different picture.

Rome was a slave based society and had less wealth inequality than our current capitalist, free market America. What does that say about our current systems?

Did you know that according to research by historian Walter Schiedel “The richest Romans kept accumulating wealth until the largest fortunes equaled about 1.5 million times the average annual per capita income in the empire. This is roughly the same ratio as for Bill Gates and the average American today.”

This study is already dated because we’ve got Jeff Bezos now, and by the time this blog gets published, I’m sure it will have changed again, but if the current trend continues than wealth inequality will keep growing with the gap between the richest and poorest Americans widening.

Although Rome had less inequality, then present day America, it still had a particularly high Gini coefficient when compared to other societies in history.

If we take a deeper dive into examining Roman structures, we see that greed had taken root in many of them. The Roman economy was largely built on slave labor, and slaves were the product of military conquest. As the empire grew, it required more slave labor. The price of that growth wasn’t cheap, the cost of maintaining the military and wars was high draining the government’s budget, so the government had to turn to taxes to try to recoup money to keep everything operating.

The wealthy Romans, however, didn’t want to pay these taxes because they wanted to protect their wealth, so many of them fled to the countryside. This furthered the economic woes of the empire.

Furthermore, the political corruption that had taken over the empire was also rooted in greed. It even got so bad as to where the Praetorian Guard would sell the seat of emperor to the highest bidder. While other politicians would take bribes and they would often pocket taxes collected in their districts for themselves.

“The people asks only for what is necessary, it only wants justice and tranquility, the rich aspire to everything, they want to invade and dominate everything. Abuses are the work and the domain of the rich, they are the scourges of the people: the interest of the people is the general interest, that of the rich is a particular interest.”  – Maximilien Robespierre

On the eve of the revolution, inequality in France had reached unheard of levels.

Like the United State today, France had a class system similar to our upper, middle and lower classes. France was setup in three estates, which were like their classes: the first estate was the clergy, the second estate was nobility, and the third estate was commoners.

France, as a nation, had experienced multiple system failures as a result of placing wealth on a pedestal. The largest failures were in:

The third estate, the commoners, who made up 98% of France’s population, were burdened with regressive taxes after France went into debt following the Seven Years War and the American Revolution.

Inequality even found its way into the clergy with the first estate being divided into two groups – clergy from nobility and those from commoners. The higher clergy lost sight of God, and was focused on money and worldly possessions. Many of the higher clergy took home excessive incomes from the 10% tithes they received. They then would move to Versailles or Paris and delegate their responsibilities to someone else. They didn’t view the church as a way to help people, but rather as a large, consistent paycheck. These greedy clergymen neglected other responsibilities like helping the poor, feeding the hungry, and caring for the sick in lieu of living lavish and opulent lifestyles.

However, it’s worth noting that the lower clergy who came from the third estate were sympathetic to the third estates plight (poverty, hunger, sickness) and they were much more liberal than their upper clergy counterparts supporting an examination of the exemption from taxation for the church. Whereas the upper clergy viewed the church as an income stream and way to preserve their wealth.

Regardless of the intentions of the lower clergy, the damage had been done and the vast majority of French grew angry with the church. This lead to an attack on the church after the revolution.

The French Revolution is a reminder that in a greedy society even the church isn’t exempt from corruption.

The United States shares shocking similarities to Rome and France 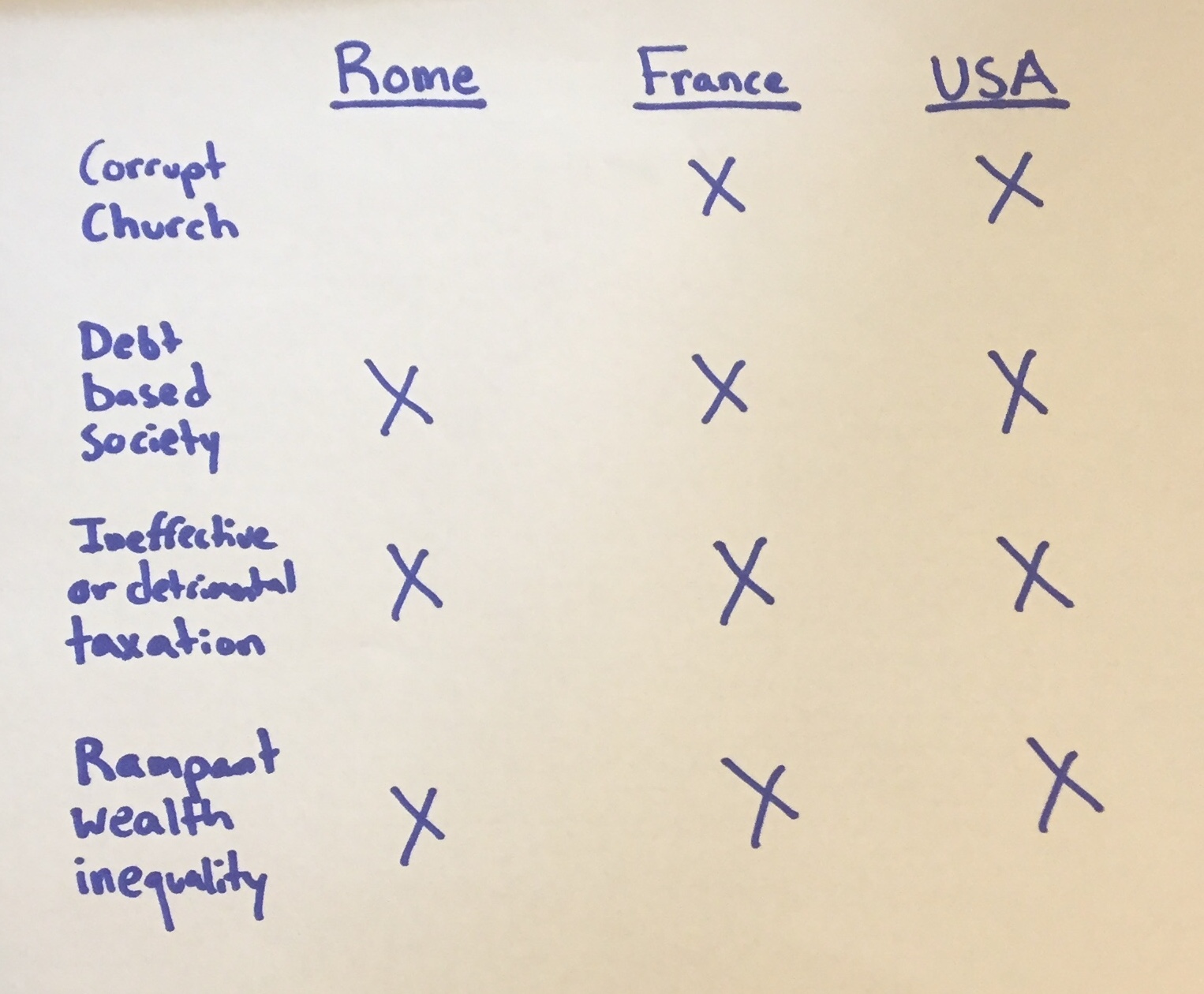